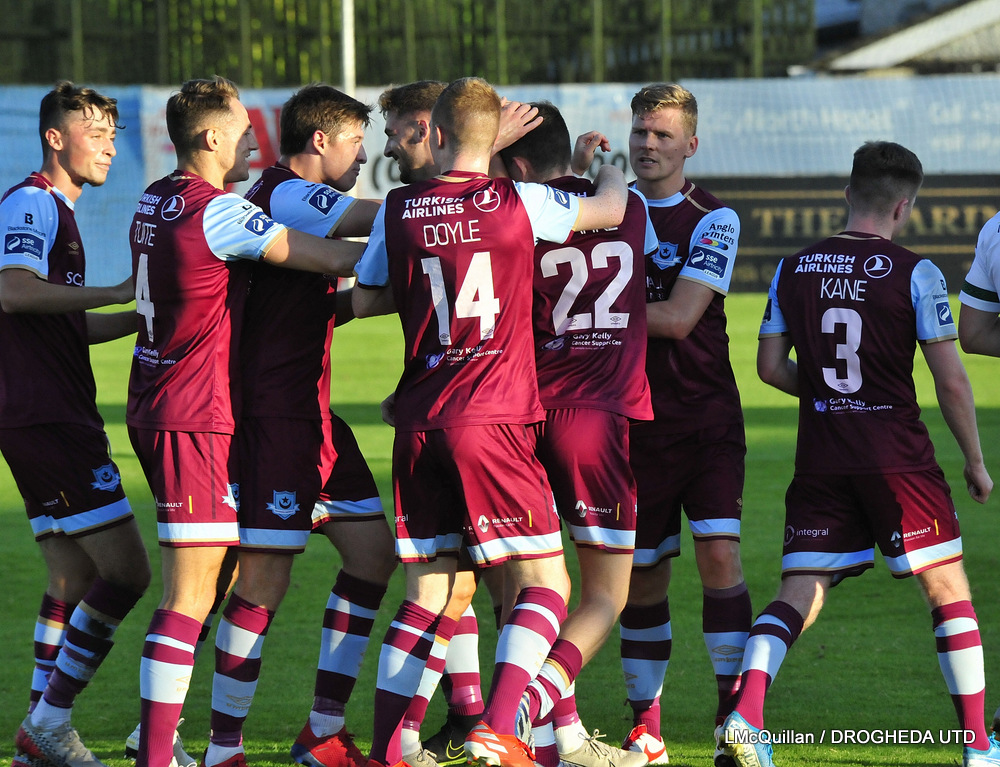 Goals from Mark Doyle, James Clarke and Stephen Meaney saw Drogheda United pick up their first win since the league resumption with a 3-1 win over Bray Wanderers at United Park.

Brandon Bermingham had the first chance of the game from the right wing as he worked his way into the box but saw his effort blocked well by Dylan Barnett.

The lead came on ten minutes though as Chris Lyons switched the ball to right-back James Brown. He found Bermingham who stood up his man before racing down the right wing.

The winger cut the ball back across the box to Doyle who controlled before finishing well into the far corner past Maher.

The moment of the match came three minutes later as Drogheda doubled their lead. Jake Hyland delivered a free into the box but Bray could only half clear with a header to the edge of the box.

Teenager Clarke controlled the ball brilliantly on his chest, lifted the ball over one Bray defender with his right foot before firing a left footed volley past Maher.

Maher was then twice called into action to deny Bermingham. First, getting his hands to a free that look destined for the top corner.

Then, after Clarke split the defence to find Bermingham, Maher got down low to deny the Drogheda winger.

Sean McEvoy was the stand out for Bray and he had the visitors first chance with a strike from the edge of the box, saved by Odumosu.

Clarke then again won the ball back and this time found Lyons, but Maher was off his line quick to deny the forward in the one-on-one.

Bray began growing into the game in the last fifteen minutes of the half as Cantwell’s header from a Keegan free was saved by Odumosu before McEvoy saw a strike deflected wide.

It took Bray eight second half minutes to get a goal back. Keegan played the ball to McEvoy who looked to find substitute Graydon.

Jack Tuite cut the pass out with a sliding challenge but the ball fell back into the path of McEvoy who finished well into the far corner.

Bray had a glorious chance to equalise four minutes later as they countered from a Drogheda corner with Callum Thompson breaking down the right.

Thompson squared the ball to Derek Daly, who controlled, and beat Odumosu but was somehow denied by a brilliant last gasp clearance off the line by James Clarke.

From the following corner, the ball dropped to Daly 25 yards out but the Bray man was again denied, this time by a fingertip save by Odumosu.

With fifteen to play, McEvoy was still a threat for Bray – this time stinging the palms of Odumosu with a powerful drive from distance before O’Farrell dragged an effort wide for Drogheda at the other end of the pitch.

Drogheda sealed the win with three minutes of normal time to play through Stephen Meaney.

Mark Doyle found Meaney who in turn found Bermingham on the right. Bermingham drilled a ball back across goal to Meaney and the substitute, on the pitch six minutes, finished past Maher.