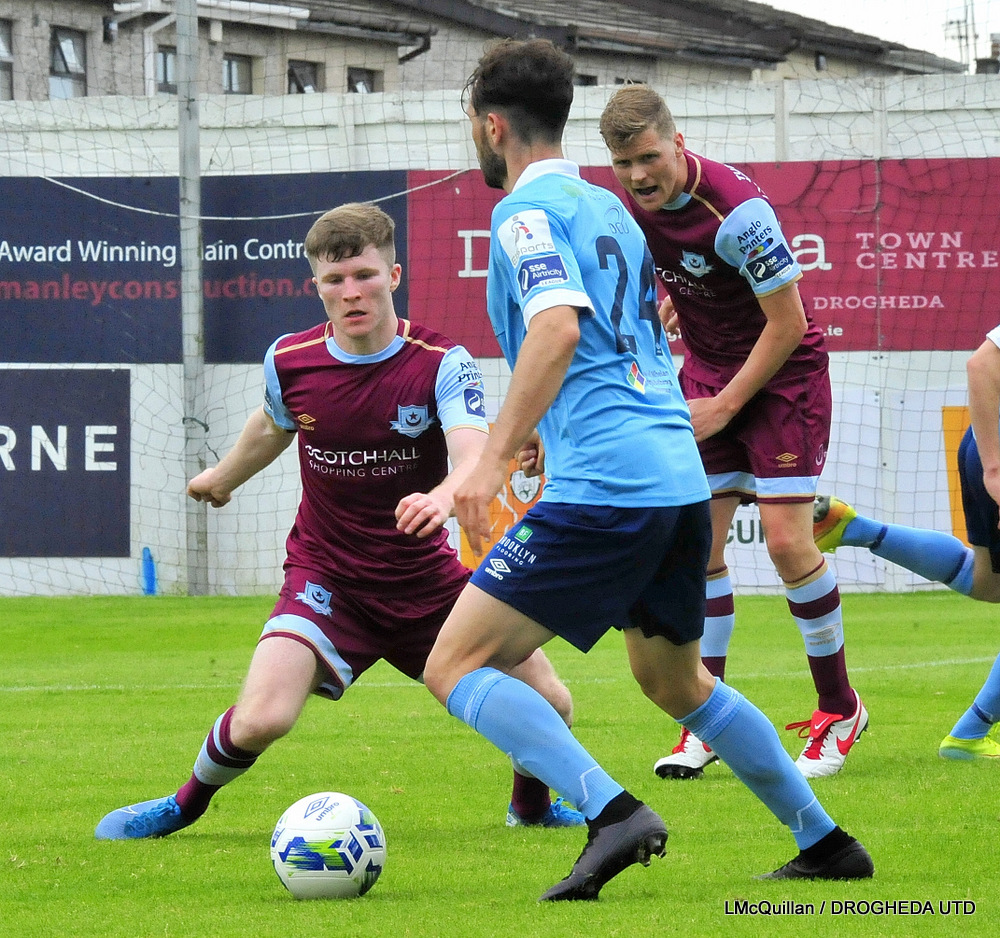 Second half goals from Eric Molloy and Dayle Rooney saw Shelbourne fightback to claim a 2-1 win in Saturday’s friendly at United Park after Jordan Adeyemo had given Drogheda the lead from the spot.

The first chance of the game fell to Drogheda from back to back corners, with Derek Prendergast threatening from the second delivery, but heading over the bar.

The visitors worked a chance down the left on eleven minutes through Brandon Daly. He found Cetiner on the edge of the box, and the winger turned his man but his shot was well saved by Odumosu, low to his left.

Mark Hughes saw a free kick gathered easily by Brady low to his right before Adeyemo almost got to Meaney’s flick on from a clever O’Farrell ball played over the top.

Karl Moore dragged a shot wide from the edge of the box after Drogheda only after half cleared a corner before the Boynesiders were awarded a penalty on 33 minutes.

Hughes played a brilliant though ball into the path of Adeyemo, who was brought down by Jack Brady in the area, after beating the Shels keeper to the ball.

Adeyemo stepped up to take the penalty himself, sending the keeper the wrong way, following up on his goal against St. Pat’s on Wednesday.

Both sides had one final chance in the half, with O’Farrell winning the ball back high up the pitch, playing in Adeyemo, who beat his man in the box but failed to hit the target.

Then, on the stroke of half time, Karl Moore’s strike was only sent wide by a last ditch block from the covering Luke Heeney.

Shels started the second half the better side but it was Drogheda who the first two chances.

The first of those saw a patient move end with Meaney finding Brown who crossed for Doyle but the winger flashed a header wide.

Kevin Doherty, in charge of Drogheda today, then made 5 changes just before the hour mark and it was almost 2-0, three minutes later.

A surging run from Brown saw him create space and find Clarke who played in Bermingham on the left. The forward took it too the line and drilled the ball into the six yard box towards Clarke, Meaney and Wixted but Alex O’Hanlon managed to clear with the ball just needing the touch of a Drogheda player.

Shels found the equaliser on 66 minutes as a switch of play found Eric Molloy who left Odumosu with no chance, firing a volley into the far top corner to level.

A ball was cut back across the box, finding Rooney, who set himself before firing in low off the post.