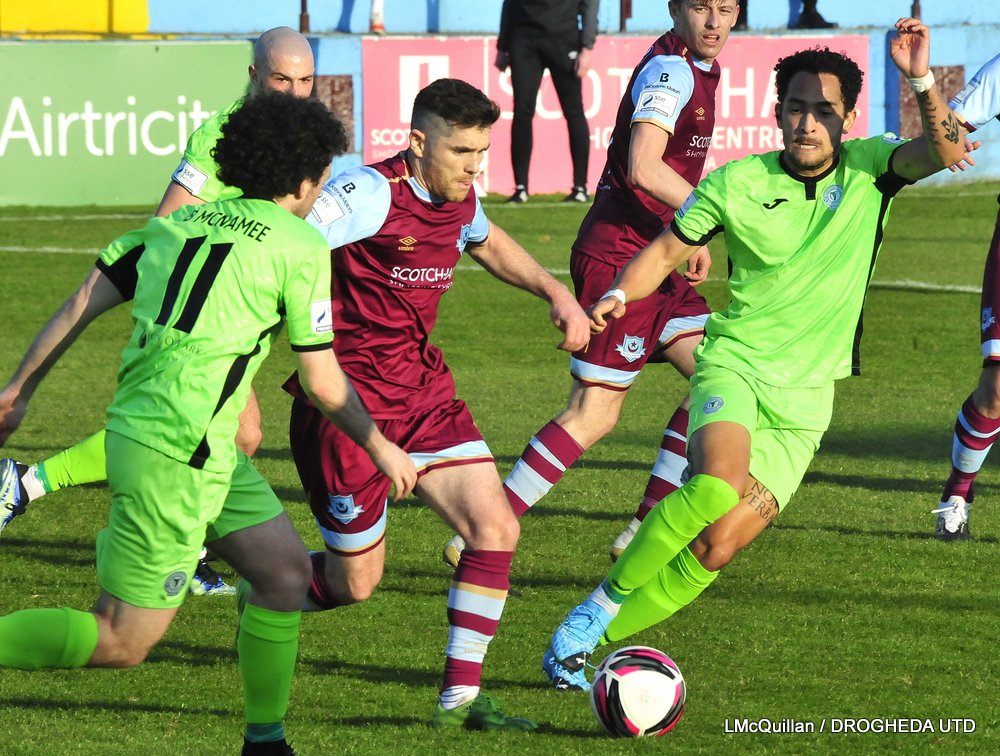 Drogheda United travel to the Ryan McBride Brandywell Stadium looking to build on a 4-0 win away to Longford Town last weekend.

Mark Doyle’s opener came after 35 minutes, with the forward himself breaking down the left, but his ball into the box was blocked, only for a scramble in the box to follow, with Doyle eventually tapping in Darragh Markey’s effort from close range.

Three goals in sixteen second half minutes put the game beyond doubt, with Chris Lyons scoring his first of the season on 51 minutes from a James Brown cross.

Doyle netted his second of the game, and third of the season, five minutes later as he headed home a Conor Kane cross before Hugh Douglas headed in a free kick taken by Ronan Murray on 67 minutes.

That leaves Drogheda sitting fifth in the table, with 7 points from four games heading into Friday’s game against Derry City.

“We’ve always played well against Longford and Saturday was no exception, it was an excellent performance,” assistant manager Kevin Doherty said.

“The first half an hour of the game was a good tempo to it, both sides were having a go, but I think after we got the first goal, we went on, which we have done on numerous occasions over the years – we get a goal and we go and get another one or two, so it was great to see.

“Training has been brilliant again this week, which it would be after winning 4-0, but in fairness even after the game we lost to Pats’ and dropping the points to Finn Harps, training was excellent.”

Doherty is aware that the trip to the Brandywell to face the Candystripes won’t be an easy task for the Boynesiders.

“In person between the two of us (Kevin & Tim), we’ve seen three of their four games and obviously watched the other game, against Waterford we weren’t at.

“With it being the Brandywell, it’s always a tough place to go, as cliché as it is, it certainly is.

“It’s a big pitch, they work really really hard, they’ve been unlucky in games. The Pats’ game for instance, they were right in it, had a great chance, Akintunde, to go one up and then had a man sent off. Which, with a team that dominates the ball like Pats’, was hard.

“It’s Derry City, they will be wanting to pick up points and will see tomorrow as a chance to get their season up and running points wise, but I think performance wise they have been really really good.”

“We’ve seen them in person, three of their four games, so we know how good they are. I’d be struggling to think of Derry down the bottom of the league come the end of season given the manager, the coaching and the players they have there,” Doherty said.

In team news, Mark Hughes continues his recovery from injury while Darragh Markey and Conor Kane are both doubtful after picking up injuries in the win over Longford Town.

“Both (Markey & Kane) have done little bits in training. We’ll know more after training tonight to be honest. We’re happy with, if changes need to be made, who we have to come in,” Doherty explained.

Friday’s game will be televised live on RTÉ2 and will also be shown on WatchLOI.

LMFM Radio will also have live commentary of the game from the Ryan McBride Brandywell Stadium, with commentary from David Sheehan and former Drogs manager Mick Cooke.