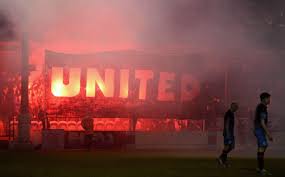 A new feature in our programmes this season will be a quickfire Q&A with a fan, talking about both the memories of supporting the club and the 2020 season. First up is Jake Davies, a passionate Drogs fan who is a regular at both the home and away matches supporting the Boynesiders.

Lewis: When did you start supporting Drogheda United F.C. and why?

Jake: “I started supporting Drogheda United when I was about 7 or 8 and I remember when my uncle used to bring me to most of the Friday night games when I was young”.

Lewis: What good memories have you got of the Drogs?

Jake: “I have a lot of great memories from Drogheda United. I remember witnessing players such as Paul O’Connor, Philip Hand, Peter Hynes, Fabio O’Brien and the Brennan brothers.”

“And I remember 2013 really well, I would have been 12 around the time and I remember where we had beaten Limerick 3-0 and Ryan Brennan scored a Paneka penalty, and I remember being at both the FAI Cup semi-final and final. We were unlucky that year to lose to Sligo.”

Lewis: Do you think Drogheda United has a big part to play in the town?

Jake: “Of course, Drogheda has a huge part to play in this town. Our club has put the town on the map of Ireland when it comes to football. Of course all League of Ireland fans would remember 2007 when we won the league title that year and that we were close to get into the Champions League but just narrowly losing to Dynamo Kiev.”

“That would have got Drogheda known across Europe because we would have played in the biggest club competition in the world.”

“The club is on the up and with everyone chipping in we can make Drogheda United the best team in the country.”

Lewis: What do you make of the squad this season, are you ambitious? Can Drogheda United get promoted?

Jake: “I am very confident that we can get promoted. I feel like we have done well in our recruitment with players such as David Odumosu and Hugh Douglas.”

“We have a lot of brilliant players within the squad and I’m very confident in getting promoted and that the new recruits will make a huge impact for Drogheda this season.”

Thank you to Jake Davies for taking his time out to do our first 2020 Drogs Q&A session.