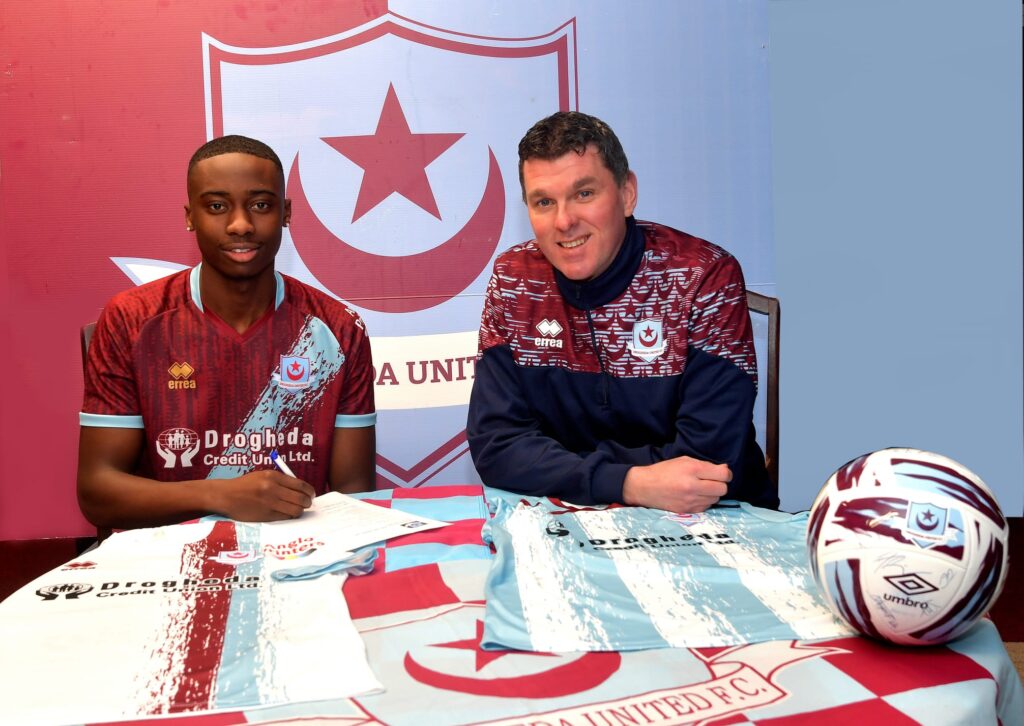 Drogheda United are delighted to announce the signing of defender Emmanuel Adegboyega from Dundalk.

Adegboyega previously played for Drogheda in 2021 at U19 level and was part of Gavin Fleming’s squad that won the U19 Shield, beating Waterford 3-1 in the final in the Carlisle Grounds.

The 19-year-old spent the 2022 season at Dundalk, featuring for the Lilywhites U19 side throughout the season.

The defender was also part of Dundalk’s first team matchday squad for their last five games of the 2022 season.

“It’s great to have him back. There’s been a lot of interest in him. He’s been excellent for Dundalk and I know they were very keen to keep him at the club so it’s a great signing for us,” Kevin Doherty said.

“I’ve known Manny for a few years. He was in with us (in first team training) a good few times and was more of a midfielder then, he’s much more a centre half now.

“It’s something we’ve been looking to do, bringing in another centre half, and I think he’s one of the most exciting young players in the country.

“In the game against Pats at the weekend, Ben Curtis and Conor Keeley were excellent but that’s just two centre halves, we’ve three now and I’m hoping to add another one so we’ll certainly be well covered in that area,” Doherty explained.

“It’s good to be back at Drogheda. There’s a few faces around the squad I’d still recognise too. I’ve converted to a centre half now. I’d say I’m fast, tall and strong, what you need in a centre half.

“Personally, the aim is to get as many minutes as possible and play well. For the team, it’s to compete and stay in the division,” Adegboyega said.