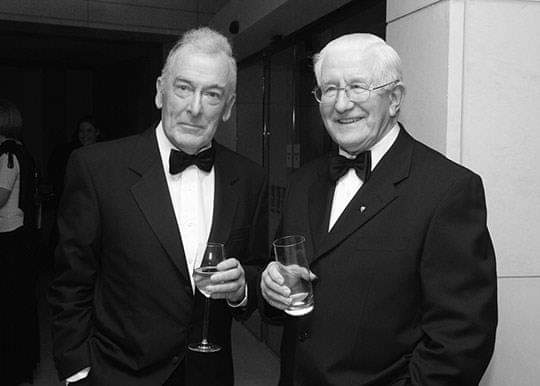 I’m going to fight for this club. I wanted to come here tonight to see what the reaction would be. I wanted to see a will to survive from you people, that sense of enthusiasm for this great club, and I’ve seen it this evening, in this town.

In 1963 a certain Vincent Hoey, who lived on the Chord Road during his childhood, joined the club as a director, which was to begin over 50 years of behind-the-scenes involvement. They Hoey’s were a well known Drogheda family going back generations in the town (Vincent’s father Paddy was a highly respected building contractor).

Hoey was a proud Droghedian who has always wanted to do as much as possible for the betterment of the town and has set up various agencies in the locality. Previous to joining the board the 28 year old Hoey had not only followed Drogheda United as a supporter, but also played for them.

“I went up to United Park as a boy on matchdays when Paddy Reilly was the chairman. The ground was a different place in comparison with today, and the players changed in a tin shed. Dessie Fagan was the cleanest footballer that I ever saw. I honestly can never remember him fouling anyone.”

“He was fantastic. Also, there was Brogan in the goals in his beautiful white sweater – you’d swear he was going out on the catwalk. I began my own career with the club in 1953 when Reilly signed me. I thought of myself as a centre-half but became a bit of a ‘Mr Versatility’ as he played me at right-full, and then centre-forward,” Hoey said.

“My first thought in 2003 was that the club needed to be saved, and whatever needed to be done to achieve this was done. People put in an awful lot of time and money, money which they couldn’t afford. I won’t criticise anyone as they had the heart and the wish to succeed, but sometimes that’s not enough. It’s a cruel business running a football club, and at times it’s been painful for myself. You can’t justify running a football club on business grounds. It’s a passion and commitment. Common sense, and business sense, go out the window.”

“We asked Dessie to come along to the book signing of Tom Reilly’s book ‘The Story So Far’. I was sitting at the table with him, Tom Munster, and Dan Connor. People were streaming in, and suddenly Dessie became a personality. He was signing book after book, asking everyone ‘who are you?’ and saying ‘I know your father / grandfather’. It was fantastic really, and I turned around to him every so often to talk to him, and he kept saying ‘My God Vincent this is amazing’. It’s another one of those memorable moments. Here was something coming back to him after all he had given to the club throughout the years.”

“What can you say about Charlie? His whole life revolved around Drogheda United. He ate, slept, and drank the club. It’s great that he saw the success that the club achieved in recent years. He was there in the early days when it didn’t look like the club would achieve anything, but he was still there in adversity,” Vincent said.

“It’s important when you win to win magnanimously. The first thing I did when we won was to go into the Cork dressing room and I said to them, ‘Look lads, I know what it’s like to lose, and for years and years we struggled. I share this moment with you and know you will successful again’. When you lose, it need not be the end of the world. Adversity proves the man. There has to be a winner and a loser in cup competitions. You have to think of the losers because it could be you tomorrow. You shouldn’t be in football if you can’t take defeat.”